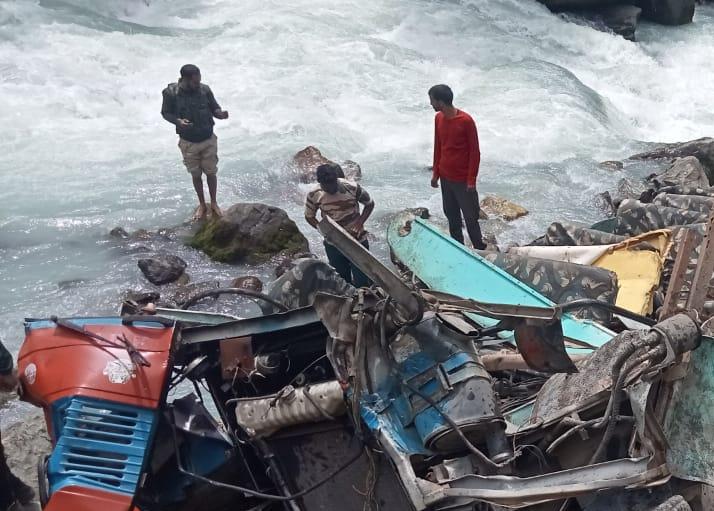 An official told that a bus carrying 39 ITBP troopers met with an accident near Chandanwari area of Pahalgam, resulting in death of six ITBP personnel and injuries to dozens others.

He said that the bus fell into a river bed, while police and other officials have reached to the spot for rescue operation.

Meanwhile, Kashmir zone police in a Tweet informed that the injured were being airlifted to Army hospital in Srinagar for treatment.

“In a road #accident near Chandanwari Pahalgam in #Anantnag district, 6 ITBP personnel got #martyred while as several others got injured, who are being #airlifted to Army hospital, Srinagar for treatment. Further details shall follow,” police tweeted

Meanwhile, DC Anantnag Dr Piyush Singla said that medical teams at GMC Anantnag, District Hospital Anantnag and SDH Seer have been put on high alert and 19 ambulances were earlier rushed to the spot.

He said that local authorities including SDM, Police, SDRF are on the spot and a massive rescue operation was undertaken, while all medical assistance was being provided.

Join The Dispatch Whatsapp Group to stay updated
The Dispatch is present across a number of social media platforms. Subscribe to our YouTube channel for exciting videos; join us on Facebook, Intagram and Twitter for quick updates and discussions. We are also available on the Telegram. Follow us on Pinterest for thousands of pictures and graphics. We care to respond to text messages on WhatsApp at 8082480136 [No calls accepted]. To contribute an article or pitch a story idea, write to us at [email protected]in |Click to know more about The Dispatch, our standards and policies

Why did Prof Soz, after all, vote against Vajpayee bringing down his Govt in 1999?
Minority community member shot dead by terrorists, his brother injured in Shopian
Comment