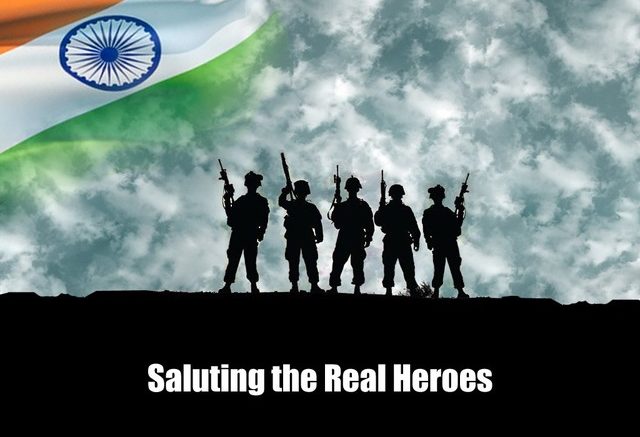 New Delhi:  India’s third-highest gallantry medal in peacetime, Shaurya Chakra, has been awarded to six Army personnel including posthumously to one for displaying bravery in anti-terror operations in Jammu and Kashmir last year.
The recipients of the prestigious award are Major Arun Kumar Pandey, Major Ravi Kumar Chaudhary, Captain Ashutosh Kumar (posthumously), Captain Vikas Khatri, Rifleman Mukesh Kumar and Sepoy Neeraj Ahlawat, according to the Indian Army.
It said four Army personnel were conferred the Bar to Sena medal while 116 others were named for the Sena medal on the eve of Independence Day.
According to the Army, Major Pandey of the 44th battalion of the Rashtriya Rifles led an anti-terror operation in a village in Jammu and Kashmir on June 9 and 10 last year and showed “unparalleled courage” while neutralising two hardcore terrorists.

Major Chaudhary of 55th battalion of the Rashtriya Rifles “exhibited exceptional resoluteness” and fortitude in leading four successful operations by his unit resulting in the elimination of 13 terrorists, the Army said.

An operation led by him on June 3 last year was specifically mentioned in his citation.

Captain Kumar of 18th battalion of the Madras Regiment has been conferred the Shaurya Chakra award posthumously for displaying “indomitable courage” and professional acumen of “highest order” in saving the life of one of his fellow soldier and eliminating a hardcore terrorist in an operation on November 8 last year.

Captain Vikas Khatri from the 16th battalion of the Rashtriya Rifles was deployed as part of a special task of “area domination patrol” in Jammu and Kashmir under the challenging terrain at the height of 12,000 feet on the nights of December 12 and 13 last year.

The Army said he eliminated one foreign terrorist despite heavy retaliation, showing raw courage and bravery.

Rifleman Kumar from the ninth battalion of the Rashtriya Rifles was part of a cordon and search operation launched on the night of July 16 based on specific intelligence inputs of the likely presence of terrorists in a remote village of Jammu and Kashmir.

“Kumar physically wrestled with the terrorist, who was shocked by the ferocity of the assault. He kept attacking the terrorist with the butt of his weapon in spite of sustaining a gunshot wound,” the Army said.

“Unmindful of his injuries, Rifleman Mukesh Kumar neutralised the terrorist from point-blank range ensuring no injuries to own troops or the civilians,” it added.

Sepoy Ahlawat has been conferred the Shaurya Chakra award for showing “exceptional gallantry beyond the call of duty and nerves of steel” during an anti-terror operation in Jammu and Kashmir on June 20 last year, the Army said.

One hardcore Pakistani terrorist was eliminated in the operation, it said.

Detailing about the incident, the Army said a group of terrorists was firing indiscriminately towards the inner cordon of the troops in a bid to escape, taking cover of civilians in the area as human shields.

It said Ahlawat waited for an opportune moment and fired accurately on the fleeing terrorists after exercising extreme restraint and displaying composure in the face of a rapidly escalating situation.

“One of the terrorists was eliminated on the spot. The second terrorist opened heavy fire towards Sepoy Ahlawat at close range. Despite the grave danger, he showed indomitable courage to hold onto his position and continued engaging the second terrorist, injuring him and damaging his sophisticated M-4 Assault Rifle,” it said.

The gallant actions of Ahlawat led to the elimination of a Pakistani terrorist, the Army said.