Among these cases, 313 cases were reported in Kashmir valley while 247 from Jammu division, taking the overall tally in J&K to 104715.

A number of these cases were confirmed at diagnostic laboratories of CD and SKIMS Soura hospitals and include thirteen soldiers—two from army’s BB Cantt here, eight from CRPF and three from BSF.

The Baramulla cases include male (22) from Sopore Baramulla.

The Ramban cases include female (75) from Banihal Ramban.

The Pulwama cases include male (65) from Ratnipora, male (24) from Beegumbag Pulwama.

The Anantnag cases include male (30) from Brah Anantnag.

The Kulgam cases include male (70) from Chohibal Kulgam,

The Kishtwar cases include female (60) from Basha Kishtwar.

Meanwhile, 565 patients have recovered and were discharged from various hospital in last 24 hours—185 from Jammu and 380 from Kashmir valley. (GNS) 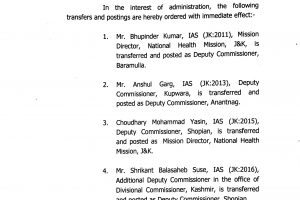 42 kgs of charas recovered in Anantnag