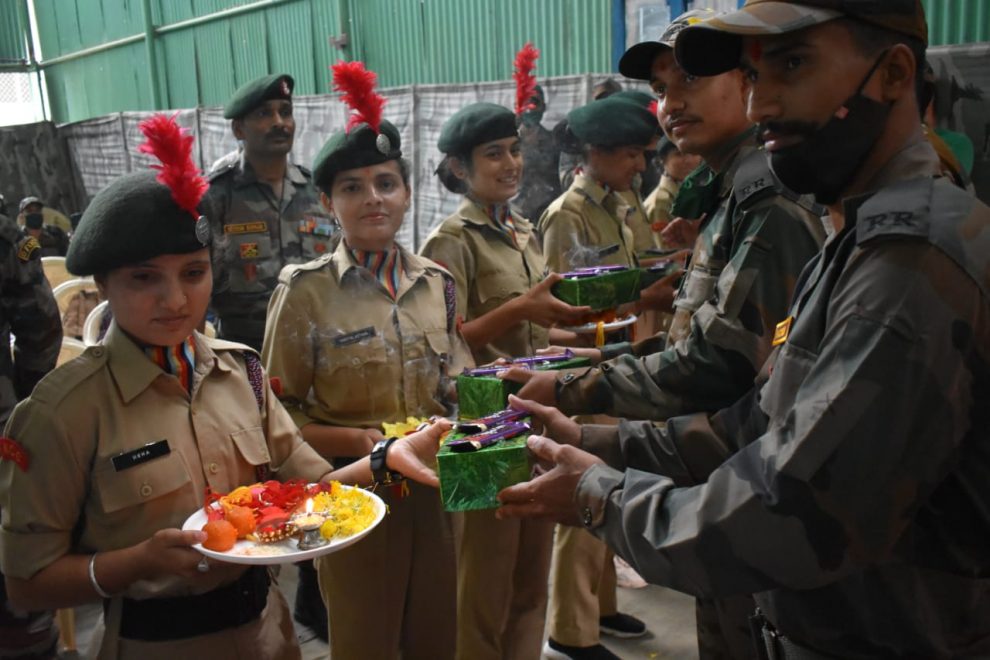 RakshaBandhanfestival of love a bond between brothers and sisters was celebrated. The Rashtriya Rifles celebrate this festival to evidence the love and brotherhood between the soldier on duty and local school going children.

A total of 20 girl students from PG College, Bhaderwah and jawans were present during the occasion.During the occasion the students interacted withthe Army personnel in an informal atmosphere.  The students and teachers expressed their gratitude towards the Rashtriya Rifles for organising the event.

The event was commenced by receiving of girl students and staff of NCC,           2 JK (I) Company NCC, Bhaderwah, Government PG Degree College, Bhaderwah.  The girl students brought Raksha Sutra (Rakhis) alongwith them and tied it on jawans symbolising the respect and love which the locals share towards the Indian Army.  A Group Song was also presented by the girl students and staff.  In reciprocation the girls students were presented with gifts as a token of thanks and promise of their protection.  The event was conduced with serving of tea, refreshment and group photographs.

Speaking on the occasion Prof Prithavi Raj associate NCC offrs PG College, Bhaderwahsaid that the Rashtriya Rifles over the years has focused on bringing normalcy in the region and made valuable efforts towards development of the locals.  The efforts of the Army have finally brought peace and brotherhood back to Bhadarwahand its adjoining areas.  By organising such events the Rashtriya Rifles further strengthened the bond that it shares with the locals and once again confirmed its firm commitment towards lasting peace and brotherhood in the area.