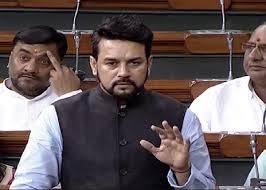 A total of 41.75 crore accounts have been opened so far under Pradhan Mantri Jan Dhan Yojana (PMJDY) out of which 35.96 crore accounts are operative. This was stated by Minister of State for Finance Anurag Thakur in a written reply to a question in Lok Sabha today. He said, Under PMJDY, a bank account can be opened with any bank branch or Business Correspondent (BC) including those of Private Sector Banks.