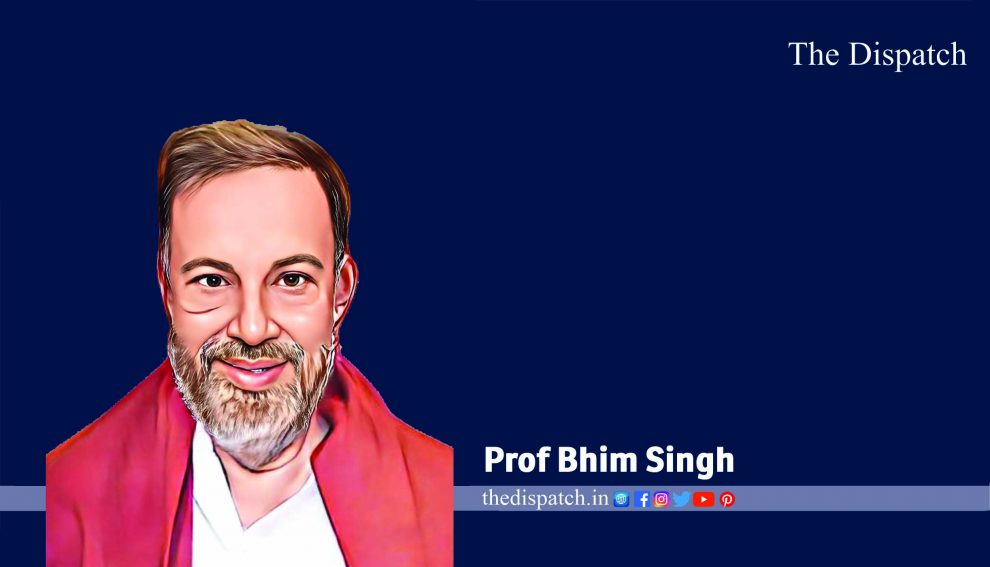 Zafar Choudhary
Add Comment
An idealist, a maverick, an intellectual, a rustic, a journalist, a writer, a lawyer, Bhim Singh was many things packed into one.

Jammu: In early 1982 while the Jammu and Kashmir Legislative Assembly was in session in Jammu, Chief Minister Sheikh Mohammad Abdullah had a brief argument with a young and fiercely articulate legislator named Bhim Singh which revolved around the need of ‘Lion’ and ‘Panther’ in the regional political binary.

Well known for his lack of tolerance for criticism, questions and disapprovals, Sheikh at 77, was going through decline in his personal health while the political issues within the party, within family and with New Delhi were mounting up. 41-year-old Bhim Singh was a rising political star in Jammu –probably most educated among all legislators from the Jammu region, an excellent public speaker, an excellent lawyer, he also had a rich network of relationships across different sections of society.

Bhim Singh’s emergence as ‘voice of Jammu’ was much to the liking of Prime Minister Indira Gandhi who had by this time run into a confrontational course with Sheikh and the National Conference. In an earlier cast of the post-2019 project of the Bhartiya Janta Party, back then the Congress also had a similar approach of raising stakes in Jammu to deal with political temperatures of Kashmir. Indira Gandhi’s requirement and Bhim Singh’s material would have made a great political project but it didn’t work.

In March 1982, the Jammu and Kashmir Legislative Assembly erupted in commotion on a piece of legislation. With obvious concurrence of Sheikh, National Conference leader Abdul Rahim Rather moved a Private Member’s Bill called the Resettlement Bill which would allow the residents of the state who had migrated to Pakistan in aftermath of 1947 events to return and reclaim their properties and settle back in Jammu and Kashmir. This had the Congress leadership on the defensive as the emerging political developments required Prime Minister Gandhi to clear her own stand.

Bhim Singh, who was a Congress MLA from Chenai-Gordi constituency since 1977, saw a major opportunity in the evolving politics. He turned against the Congress leadership for its allegedly inadequate response to the Resettlement Bill. Bhim got in touch with some of his colleagues within the Congress party and other walks of life to explore possibility of a regional political party of Jammu which could be an answer to National Conference and a leader who could stand up to Sheikh Abdullah.

In April 1982, the Assembly passed the Resettlement Bill triggering a nationwide debate on the obvious lines of national security. By this time Bhim Singh had his brand new ‘Panthers Party’ in place to present itself as ‘voice of Jammu’ and a secular political alternative to National Conference. A Muslim lawyer from Kishtwar gave Bhim Singh the title of Sher-e-Jammu, as a message to Sheikh Abdullah who was widely referred to as Sher-e-Kashmir –the lion of Kashmir. From here begins the colourful political journey of Bhim Singh spanning over next four decades even as he had already made remarkable impact as student leader way back in 1960s.

While Bhim was yet to be disqualified as a legislator for revolting against the Congress, his last argument with Sheikh Abdullah, on the floor of Assembly, was interesting. “You are a decent human being, why do you want to be known as an animal”, Sheikh asked Singh with reference to the name of his party, the Panthers Party. Bhim Singh replied, “the Panther had to come out to save the human beings from the lion”, a reference to Sheikh as the ‘Lion of Kashmir’.

Later that year Sheikh Abdullah died in September and Farooq Abdullah took over as Chief Minister. In 1983, Jammu and Kashmir went to next Assembly election which was the first test for the popularity of Panthers Party. As it continued till the end, the popularity was always of Bhim Singh’s and not as much of his party. The Panthers Party contested on 50 of the 75 seats, but could win only one seat –Bhim Singh’s own. His wife Jaya Mala was also one of the contestants –from Udhampur constituency –unsuccessful though.

Since 1983, Bhim Singh’s party and he personally have contested every election in Jammu and Kashmir, from Panchayat to Parliament with no major success across four decades. After almost every election, Bhim Singh went to the courts to challenge results or wrote a book to allege that elections were unfair.

2002 was the watershed moment in the life of Panthers Party when they won four seats –Harsh Dev Singh, Balwant Singh Mankotia, Faquir Nath and Yash Pal Kundal. Bhim parleyed with both Sonia Gandhi and Mufti Mohammad Sayeed to bag two ministerial positions in the PDP-Congress coalition government and an Upper House berth for himself. This was Panthers Party’s short-lived tryst with power that lasted only for three years. Taking over as Chief Minister in 2005, Ghulam Nabi Azad dropped Harsh Dev Singh and Kundal. Three of the Panther members returned to Assembly in 2008 while the party couldn’t win any seat in 2014.

Who was Bhim Singh?

An idealist, a maverick, an intellectual, a rustic, a journalist, a writer, a lawyer, Bhim Singh was many things packed into one. He was educated in Law from Aligarh Muslim University and obtained further education in London.  As a student leader he was a popular face of the agitation of 1960s demanding setting up of University in Jammu. Unlike every major leader from the region, Bhim Singh didn’t restrict himself to the Dogra heartland of Jammu.

He spoke and fought for everyone who needed a voice. A thoroughly secular leader, who would think, read and write, Singh had enviable network of relationships transcending multiple boundaries. He was instrumental in setting up a Track II dialogue with Sardar Qayoom Khan, then the top leader of Pakistan occupied Kashmir. His friendship with Gulf leaders like Saddam Hussein of Iraq, Yassar Arafat of Libya and Muammar Gaddafi of Libya made him notable across the country.

“We fight for people at every forum. We fight on the streets; we fight on the floor of Assembly. If nothing works, we fight in the courts”, Bhim Singh once said to this writer. He had scores of cases taken to the Supreme Court. Notable among them are petition for holding elections in mid 1990s when Jammu and Kashmir reeled under the central rule, petition for relief to migrants of Jammu region at par with Kashmiri migrants, setting up of State Bar Council etc. He appeared in courts for hundreds of those facing militancy related charges but didn’t have a lawyer to defend them.

For over five decades of his active political life, Bhim Singh strived for harmony and unity between regions and communities within Jammu and Kashmir as also across the Line of Control where enjoyed considerable respect. He wanted re-unification and re-organisation of Jammu and Kashmir, something he would call as Bhim Singh formula for lasting peace in the region.

Bhim Singh spared no occasion to make his opposition to the August 5, 2019 events known. He did not have as much problem with the abrogation of Article 370 as he had with the downgrade of State to the Union Territory.

Who was Bhim Singh? It is practically difficult to describe in one article.

Lonely in the end

The evolving political environment in Jammu and Kashmir had long been shrinking space for those who liked to strike balance across regions and communities. This began in Kashmir and then Jammu followed with more vigor. Bhim Singh always saw Jammu and Kashmir as one political entity and all people as one. He was above regionalism and communalism. It was mainly for this reason that he could not build an electoral constituency for his party. In his last days, as he laid on the hospital bed, Bhim was abandoned by family members Harsh Dev Singh and Balwant Singh Mankotia who also made the core of the party.

A protracted confrontation ended in Harsh and Balwant joining the Aam Aadmi Party. His wife Jay Mala also sided with Harsh Dev by issuing a public statement in March this year. Bhim Singh would still issue statements from the hospital bed, where he died in the morning of May 31, calling for revival of the Panthers Party.

Prime Minister Narendra Modi was gracious enough to issue a statement on demise of Bhim Singh. So was former Prime Minister H.D. Devegowda. As condolences poured in, everyone described Bhim Singh as a legendary political activist who fought for people without any discrimination. Dr Farooq Abdullah was among the major political leaders who visited Panthers Party office to pay final respects to Singh.