Home DataJournalism 334 soldiers martyred in areas where AFSPA is in force in last... 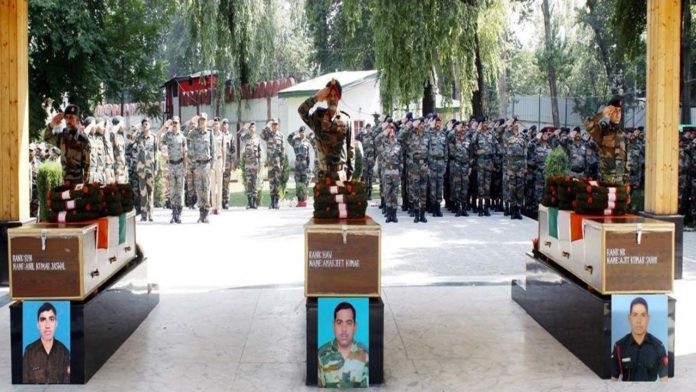 New Delhi: As many as 334 soldiers were killed from 2016 to 2018 in areas where the Armed Forces Special Powers Act is in force, defence minister Rajnath Singh told Parliament on Monday.

In a written response to a question in the Rajya Sabha, Singh said 113 soldiers were killed in 2016, 125 in 2017 and 96 in 2018 in areas where the AFSPA is in force. The AFSPA, which gives special powers to the armed forces, is in place in Jammu and Kashmir and certain parts of the north-east. Singh said 69 soldiers were killed in border skirmishes from 2016 to 2018.

Responding to another question, he said the Army suffered 31 casualties during tactical actions in the said period. Replying to another question, the defence minister said 87 soldiers were killed in terrorist attacks in 2017 and 2018. “The army carries out a periodical review of the security arrangements of all its camps, garrisons and installations, based on threat assessment and analysis of past incidents,” Singh said. On the basis of these reviews, suitable drills and procedure are adopted to counter such threats, he added.