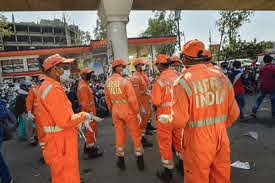 “I just had a meeting with IMD Chief, Dr Mrutyunjay Mohapatra and he said the rains have already picked up and the landfall of the cyclone will happen sometime early morning tomorrow. Cyclone is moving along the expected lines and it is going to be a severe cyclone. The speed of the cyclone can range from 85-110 kmph and that is what we call a negotiable cyclone,” he added.
Prime Minister Narendra Modi on Tuesday spoke to Tamil Nadu and Puducherry Chief Ministers Edappadi Karuppa Palaniswami and V Narayanasamy respectively regarding the situation in the wake of Cyclone Nivar and assured all possible support from the Centre.
“As predicted, huge impacts of the cyclone can be witnessed in Puducherry and Tamil Nadu. Everything is under control. We are working in a pandemic and are giving the necessary assistance. The recce of various places has been done. The state governments are cooperating and made cyclone shelters at various places. Overall, the situation is under close observation”, Pradhan said.
Saying that NDRF teams are fully ready to handle the situation, he said he will be meeting the IMD Chief on Wednesday. Cyclone is going to be followed by heavy rains in the upcoming days.