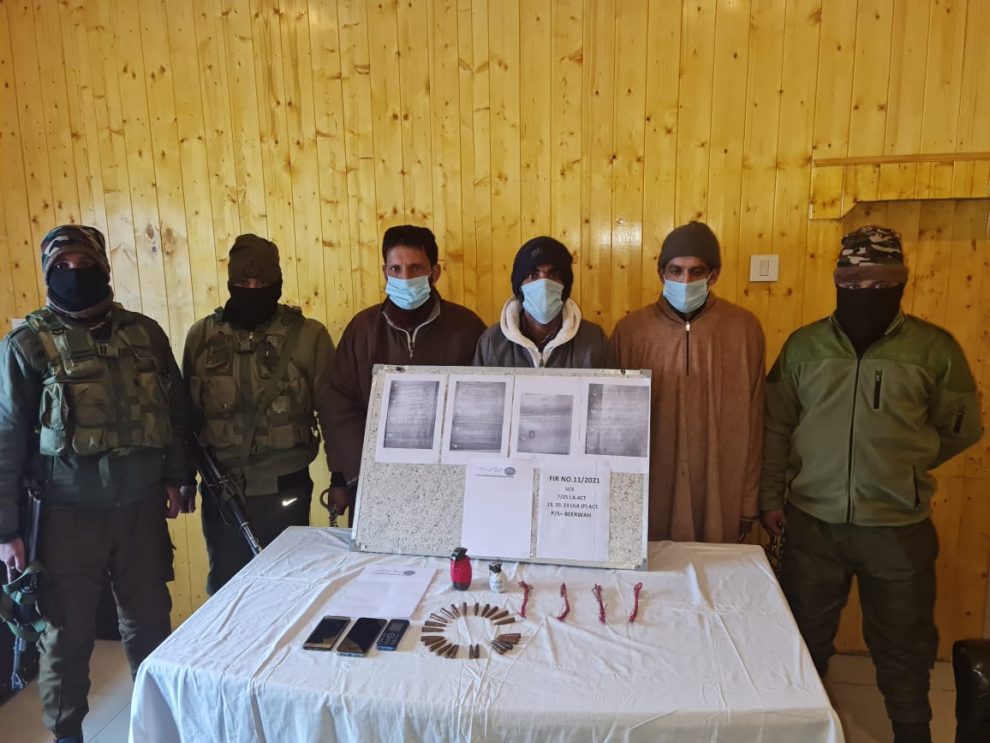 As per the police statement, These militant associates are affiliated with outfit LeT and were also working for other militant outfits viz Tehreek ul Mujahideen.

Two Hand grenades, 25 AK-47 rounds, 04 detonators, mobile phones used to contact with Pakistani handlers, threat posters and other incriminating material has been recovered from them and they have been booked in case FIR No. 11/2021 under relevant sections ULA (P) and I.A Act of police station Beerwah.

These militant associates were operating in Budgam and Srinagar Districts with the aim to target newly elected DDC members and disrupt elections. They were in touch with handlers in Pakistan viz Sheikh, Usman, Tariq, Haftullah and others. These militant associates in garb of securing admissions in Pakistani educational institutions, were managing contacts with Pakistan based militant handlers in order to recruit militants and revive militancy in Budgam.

They were also involved in several grenade attacks in district Srinagar. The militant associates disclosed that their motive was to recycle the ex-militants and target DDCs, security forces and political workers. This group has also been active in issuing threat letters to political workers in recent past, the same have also been recovered from them.

Their nefarious designs of disrupting democratic process and harming peace loving citizens on behalf of Pakistan based handlers has been thwarted due to timely action by Budgam police and SFs, reads the statement.