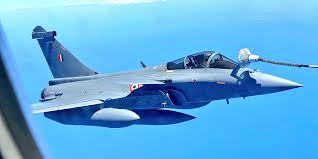 The second batch of three Rafale aircraft landed at Jamnagar Air Base in Gujarat last evening.

The aircrafts got airborne from Istres airbase in France and flew non-stop for over eight hours.

They covered a distance of over 3700 nautical miles with three in-flight refuellings.

These jets are expected to reach Ambala after a day-long break at Jamnagar Air base.

The IAF is expecting three to four Rafale jets being delivered every two months.

The aircraft arrived in India at 8:14 pm after flying non-stop from France.