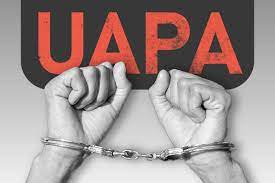 SRINAGAR: The Ministry of Home Affairs (MHA) Wednesday informed the parliament that a total of 25 cases of sedition and Unlawful Activities (Prevention) Act, (UAPA) were registered during the last five years, in the union territory of Jammu and Kashmir of which five persons were charge-sheeted.

The Minister of State (MoS) in the Ministry of Home Affairs Nityanand Rai was replying to the queries raised in the parliament, including the number of cases of sedition and Unlawful Activities (Prevention) Act, (UAPA) registered during last five years and the number of registered cases under sedition and UAPA wherein charge sheets have been filed, along with the number of persons chargesheeted.

Besides the details of the number of cases where accused have been convicted out of total cases registered under UAPA and sedition during the last five years till date.

In a written reply to the house, the MoS said that the National Crime Records Bureau (NCRB) compiles the data on crime as reported to it by States and Union Territories and publishes the same in its annual publication ‘Crime in India’.

About the cases from the year 2015 to the year 2019 under the Sedition (Section 124 A IPC) and under the Unlawful Activities Prevention Act (UAPA) it said that a total of 25 cases under aforesaid sections were filed.