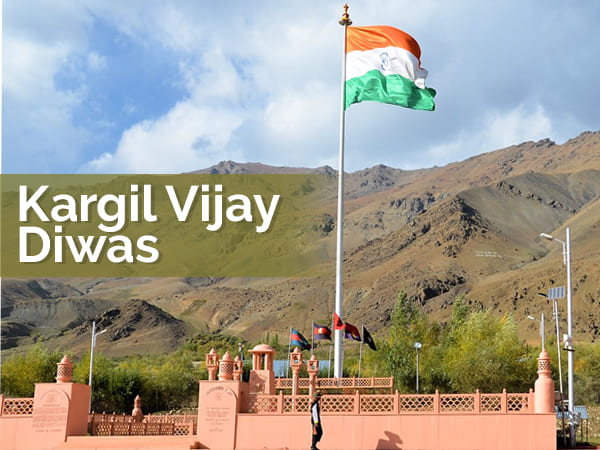 The day marks the victory of Indian armed forces in Operation Vijay in 1999, when they evicted the infiltrators backed by Pakistani army from high outposts in Kargil sector.

President Ram Nath Kovind will visit Kargil War Memorial at Drass in Ladakh today and pay homage to the indomitable courage and sacrifice of the Indian Armed Forces during the Kargil Conflict in 1999.

Vice President M. Venkaiah Naidu today saluted the heroes of the Kargil War and paid homage to the martyrs for their supreme sacrifice. In a tweet, Mr Naidu said, he joined the nation in remembering Indian armed forces’ saga of valour and gallantry. He said, the nation will remain forever grateful to them and their families.

Prime Minister also shared an excerpt from last year’s Mann Ki Baat programme on All India Radio. He said, India can never forget the circumstances under which this Kargil war was fought.

Defence Minister Rajnath Singh today bowed to the indomitable valor and sacrifice of the Indian Army, on the occasion of Kargil Vijay Diwas. In his video message, Mr Singh said, the victory achieved by the Indian Army in Kargil, in spite of difficult and unfavourable condition is incomparable.

In a  tweet, Indian Army said, Kargil Vijay Diwas epitomizes the Saga of Valour of our soldiers during Kargil War. The gallant soldiers of Indian Army triumphed over Pakistani invaders with undaunted courage and determination.

On the occasion of Kargil Vijay Diwas, Prime Minister Narendra Modi today paid homage to all those who lost their lives in Kargil protecting our nation. In a tweet, Mr Modi said, their bravery motivates people every single day.

On the historic Kargil Vijay Diwas, AIR News will bring a special programme remembering the valour of Indian Soldiers which will be broadcast in Parikrama Programme at 4.30 PM today.

AIR correspondent reports that, on his second visit to Ladakh, President of India and Supreme Commander of the Indian Armed Forces Ram Nath Kovind will be participating in 22nd Anniversary of Kargil Vijay Diwas. He will be the first President to visit Kargil War Memorial at Drass and participate in Kargil Vijay Diwas celebrations.

India is also celebrating Golden Victory of Bangladesh Liberation this year. As part of nationwide commemoration of the Golden Victory to Indian Armed Forces in 1971 war, a Victory Flame will be received at  War Memorial in Drass around Nine in the morning followed by Kargil Vijay Diwas celebrations.