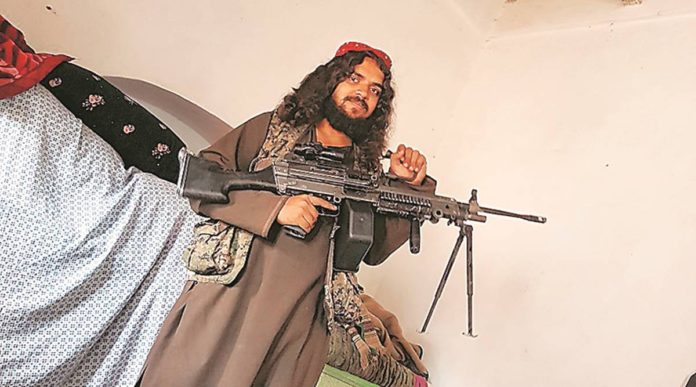 While each step of the February 2019 Pulwama attack was carried out on the directions of the Jaish-e-Muhammad bosses in Pakistan, the target itself — a convoy of vehicles carrying CRPF personnel — was chosen by a 22-year-old shopkeeper from Kakapora in the same South Kashmir district, investigators have found.

This man’s contribution to the attack was highly appreciated by the key planner of the attack, Mohammed Umar Farooq — in a voice message sent to Pakistan, Mohammed Umar compared him to Afzal Guru, the 2001 Parliament attack convict who was hanged in 2013.

In its 13,500-page chargesheet, the National Investigation Agency (NIA) has claimed that this man, Shakir Bashir Magrey, a fresh JeM recruit who ran a furniture shop near the Lethpora bridge on the Jammu-Srinagar highway, was the most important local cog in the February 14, 2019 terrorist bombing in which 40 CRPF personnel were killed.

After Jaish chief Masood Azhar’s nephew Usman Haider was killed in an encounter in Kashmir in October 2018, another of Azhar’s nephews, Mohammed Umar, was given the responsibility to plan and carry out a major attack on the security forces, the NIA has found.

According to the chargesheet, Mohammed Umar and his associates decided to build a car bomb to execute the attack. However, the group could not decide on the target or the location.

“They kept discussing about where security forces gather in large numbers. It was Shakir Bashir, who then suggested that CRPF convoys which pass through the highway could be targeted near his shop. Since he had his shop right on the highway, he said he regularly observed passage of such convoys. He pointed out that at one point the highway has a steep gradient and turn which would be the ideal spot to ram a car bomb as the convoy would slow down. The spot also had a slip road to enter the highway,” a senior NIA officer told The Indian Express .

The success of the attack, and Shakir Bashir’s contribution to its planning so endeared him to Mohammed Umar that in a voice message sent to Masood Azhar’s brother Rouf Asgar in Pakistan, he said that the work done by Bashir was as good as that of Afzal Guru in the Parliament attack, the officer said.

“He (Mohammed Umar) asked Jaish bosses in Pakistan to take care of him (Shakir Bashir),” the officer said.

According to the chargesheet, Bashir’s contribution in fact, went far beyond choosing the target and conducting reconnaissance. The IED itself was assembled at his house, and he even drove the car bomb until the highway before the fidayeen (suicide) bomber Adil Ahmed Dar took the wheel.

Bashir provided shelter to Umar and his associates at his home on multiple occasions, and the final video of Adil Ahmed Dar too, was shot at his residence, the NIA has found.

Afzal Guru’s name also appeared in another voice message exchange between attackers and their Pak bosses. Umar and his associates said Adil Dar’s video was a presentation of “AGS Media”. ‘AGS’ stood for ‘Afzal Guru Squad’, a name the Jaish has used to mark several of its recent attacks, including the one at the Pathankot airbase in 2016.

“The [Jaish] bosses were not very happy with the usage of the term ‘AGS Media’. In a voice message sent to Umar, they asked him not to use it again, particularly for the video they were supposed to make of the bodies of the CRPF personnel after the attack. This video was supposed to be used for propaganda, and the message from Pakistan was to only use the Jaish flag. We don’t know why they did this,” an NIA officer said.

Shakir Bashir is also suspected to have been involved in planning another attack that the group intended to carry out after Pulwama. Voice messages from Umar’s phone show these plans were at an advanced stage, but had to be shelved because of India’s Balakot airstrike (on February 26), and because Umar himself was killed in an encounter about a month after the Pulwama attack.

“In a voice message sent to Pakistan, Umar had informed that a second car had been prepared for the attack. However, this car has not been found yet,” another NIA officer said.

The group had also wanted to kill foreign journalists in an attack, but they were stopped by their bosses in Pakistan, according to the NIA.

“This was when a lot of foreign journalists gathered at fidayeen Adil Dar’s house in Kakapora after the attack. A voice message sent to Pakistan asked, ‘Bade firangi jamaa hain, udaa dein kya?’ (A lot of foreigners have gathered here, should we finish them off?),” the officer said.

According to the chargesheet, Shakir Basheer has no previous record of involvement in terrorist activities. He was introduced to Umar in August 2018—three months after Umar infiltrated into India—by a wealthy sawmill owner from Pulwama, Bilal Kuchey. A resident of Kakapora—to which both Shakir Basheer and Adil Dar belonged—Kuchey himself was drawn into the Jaish by his acquaintance Abbas Rather, a floating overground worker for various terror groups.

A resident of Hajibal in Pulwama, Rather runs a small grocery shop, but has been known to do overground work for the Lashkar-e-Taiba, Jaish, and Hizb-ul-Mujahideen, NIA sources said. A typical operator of conflict zones, Rather was also a police informer, and had served time behind bars under the Public Safety Act.

Rather played a crucial role in bringing the group together, and introducing them to Umar. He was also instrumental in roping in Insha Jan—a 19-year-old woman from Hajibal—and her father into the conspiracy, according to the NIA.

“Jan’s two cousins had earlier joined militancy and were killed in police encounters. Umar spent considerable time in Jan’s house. She would cook and take care of him. They have posed together with guns and ammunition for multiple photographs,” an NIA officer said.