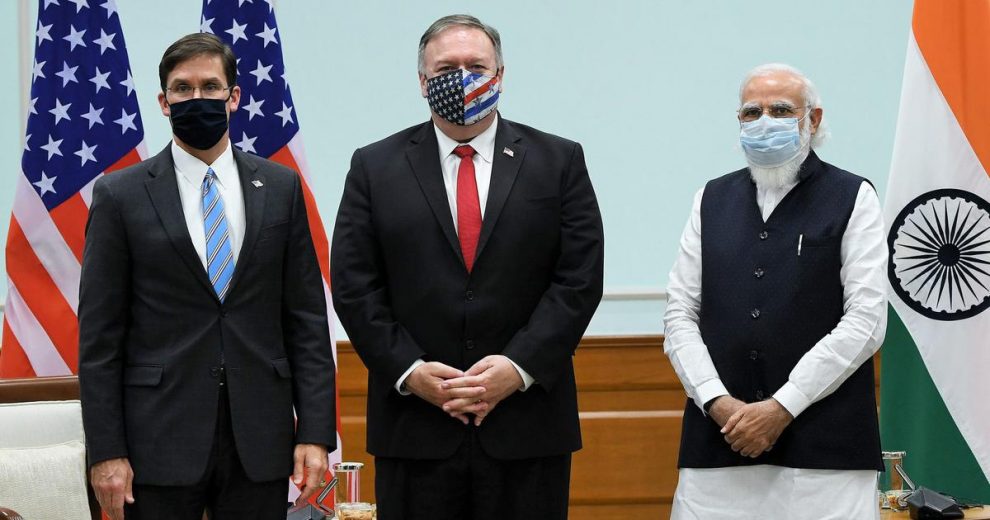 Much-publicised 2+2 meeting between India and the US concluded on 27th October triggering a good deal of reflection in at least three capital cities – New Delhi, Washington DC and Beijing. The meeting was observed by majority of the countries in the world. What is the significant outcome of the meeting for India-US bilateralism, the security of Indo-Pacific region, and containment of aggression by China?

Indubitably, the meeting meant a lot for India which is in a deadly border stand-off with China for about last six months. Eight rounds of negotiation between various levels of Army leadership have already taken place. But the status quo post-May 2020 remains frustrating New Delhi’s attempt to restore the status quo that existed before May. Although India and China have experienced longer border skirmishes and stand offs, one is not sure how the current stalemate is going to be resolved.

Interestingly, India’s border conflict with China coincides with the US fight against the latter for supremacy of world leadership. The current leadership in Beijing, buoyed by a rapid and huge economic and technological growth has covertly challenged US’ solo-super power status. Having propped up China primarily to exploit its demographic dividend, cheap man-power and stringent anti-labour laws, the US is desperately fighting back to restrain China and retain its numero uno position in world politics.

For some inexplicable reasons, Beijing flexed its military and economic muscles to underline its hegemony in Indo-Pacific region. Fearing competition and resistance from India, Beijing decided to bully New Delhi. New Delhi’s opposition to China’s way of doing things – buying off its neighbours, meddling in India’s internal affairs using its satellite state Pakistan and so on – was manifested in her refusal to join Beijing’s flagship project Belt and Road Initiative.

Against such a backdrop, in the form of a common threat from China, the 2+2 comprising foreign ministers and defence ministers of India and the US met for the third time. Although, the Indian ministers attending the meeting were reticent about naming China, the US, namely the Foreign Secretary Mike Pompeo has been vigorously vocal against Chinese aggression and expansion in the Indo-Pacific region. He has travelled from Delhi to Colombo and Male to beef up US strategy to counter China in those countries. Pompeo announced the opening up of the US Embassy in Male to monitor Chinese expansive activities in the Island country.

In Delhi, in the 2+2 meeting, the agenda consisted of defence cooperation, restoration of the supply chain disrupted by the pandemic, and sharing of vaccines, therapeutic and medical equipments. The situation in Afghanistan, cross-border terrorism sponsored by Pakistan also figured in the discussion. But the most important item was the signing of the Basic Exchange and Cooperation Agreement (BECA) which would enable sharing of sensitive and strategic military communication between the armies of two countries. Significantly, India will be able to access satellite imagery, maps and aeronautical data that will help the military to accurately strike targets. Furthermore, India could acquire sophisticated drones from US which will help find accuracy of automated systems and weapons like missiles.

The just-signed agreement is the last of four foundational agreements building the defence partnership. The other three are: Communications Compatibility and Security Agreement (COMCASA) signed in 2018, Logistic Exchange Memorandum of Agreement (LEMOA) in 2016, the General Security of Military Information Agreement (GSO-MIA) in 2002. These agreements seal a security deal even short of a formal alliance. In other words, these agreements provide intelligence, surveillance and reconnaissance (ISR) during joint exercise and operations. In addition, under the purview of Defence Technology and Trade Initiative (DTTI) both the countries have scope for co-development and co-production of technologies.

How is the latest India-US defence pact viewed in three countries – India, China and the United States? The US, on its part, makes it clear that it is interested in building a healthy and robust partnership with India for peace and security in Indo-Pacific region and beyond. The statement by the powerful Foreign Secretary of US, who was the chief spy of their country as head of CIA and has been tipped by Donald Trump to run for presidency in 2024, testifies US’ intentions. He said, “We regard US-India comprehensive global strategic partnership to be critical to the security and prosperity of countries, the Indo-Pacific region and the world”. On Chinese threat at the border, Pompeo assured “We will stand with the people of India to confront threats to their sovereignty and liberty”.

Beijing has dismissed US role or presence in India-China relations or disputes. It maintained that the border dispute between both countries is a bilateral issue and will be solved bilaterally. Beijing also has held the view that any alliance, be it India-US or the Quad, should be made for collective peace and security, not aimed against any particular country. Underlying such rhetoric is the growing Chinese concern over the consolidation of Quad and India-US partnership. For the first time, all four Quad members will be participating in a joint naval exercise in Bay of Bengal and Arabian Sea in November 2020.

New Delhi has been cautious in snuggling up to the US tent for various reasons. The Congress/UPA regimes leaned towards former Soviet Union and China. That is why the relationship with US was cold-shouldered, except under the Prime Ministership of Narasimha Rao and Manmohan Singh. In particular, Singh signed the nuclear pact with USA even risking the stability of his alliance government. The governments of BJP/NDA broke the mould in our foreign policy and restructured our relationship with countries. The personal chemistry between Prime Minister Modi and Trump has enhanced the partnership, and the unexpected Chinese incursion in Ladakh area leapfrogged the bilateralism between India and US.

Defence experts suggest that these agreements provide adequate safeguards to protect India’s autonomy and sovereignty. The US has been sensitive to India’s stance of neutrality and autonomy etc. No wonder the Indian leadership keeps talking about a multi-polar world or at times a plurilateral world politics. The Indian Foreign Minister after the meeting talked about, “a multi-polar world which must have a multi-polar Asia as its bases”. Both the Indian Ministers did not name China and encouraged US to take frontally on China. That is why Pompeo in New Delhi, called China an enemy of democracy and the free world, and in Colombo called it a predator.

The critics mainly on the Left express deep suspicion about growing affinity between India and the US. They fear Indian armed forces being bound with American military and their strategic designs. The interlocking of electronic and communication system could have adverse affect on the integrity and autonomy of Indian defence structure. It is not, they contend, in the national interest. The Central Government should continue to negotiate with China at the highest political and diplomatic levels to resolve the border issue, not by being subordinate to America’s geopolitical strategy in Asia. This contention is plainly absurd. The Indian government should appoint such critics of US and advocates of negotiation with China as interlocutors to retrieve 4800 sq kms of our land from Chinese occupation and to mitigate the current standoff at Ladakh. They should better remember Winston Churchill’s famous words during the Second World War in regard to the Nazis, “You cannot negotiate with a tiger when your head is in its mouth”.

The call for a self-reliant India and the way forward
Land Laws: Why would anyone like to ‘unsettle’ in Jammu & Kashmir?
Comment