The 2002 Kaluchak Massacre was a terrorist attack on 14 May 2002 near Kaluchak in Jammu and Kashmir.
Three terrorists dressed in Indian army outfits boarded a Manali to Jammu Himachal Road Transport Corporation bus at Vijaypur on May 14 morning in 2002. They had reportedly crossed the Line of Control from Pakistan
At 6 AM they stopped the bus near Kaluchak, shot the driver and conductor of the bus, and opened indiscriminate fire on the passengers inside the bus.
Sentries of the nearby army units in Kaluchak challenged the terrorists and a firefight begin but the terrorists were able to sneak into nearby army family lines. They also threw grenades on some vehicles parked in the vicinity.
Inside the family lines they fired indiscriminately killing 3 Soldiers and 18 family members.
The terrorists were eventually cordoned off and eliminated by 1000 hours.
However, in this entire episode, we lost 31 including 03 Army personnel, 18 Army family members and 10 civilians. The dead included ten children.
There were 47 wounded including 12 Army personnel, 20 Army family members and 15 civilians. 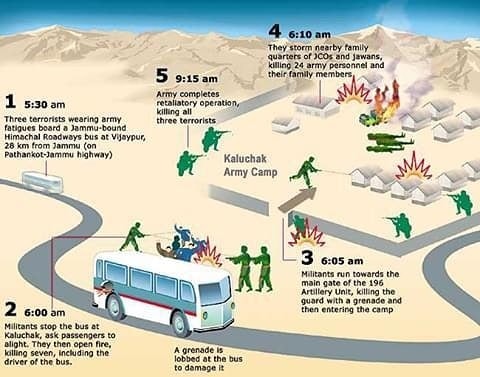 Indian Prime Minister Atal Bihari Vajpayee termed the massacre “a most inhuman and brutal carnage”. Hundreds of army personnel and their family members held candlelight prayers on Friday night in memory of those killed in one of the worst ever terrorist strikes in Jammu and Kashmir, in May.

Jaswant Singh, the then Minister for External Affairs, writes in his book A Call To Honour – In Service of Emergent India that the Kaluchak incident was the last straw that almost led to war between India and Pakistan (see 2001-2002 India-Pakistan standoff), and was the closest that Pakistan and India came to war.

Then Indian Union Minister of State for External Affairs Omar Abdullah blamed Pakistan for this massacre and argued for escalating the response against Pakistan, citing the “sheer barbarity” of the attack. Then Chief Minister of Jammu and Kashmir Farooq Abdullah also blamed Pakistani intruders, calling them “animals.”

Members of Parliament of India unanimously blamed Pakistan for this attack.

The President of the United States George W. Bush condemned the massacre as a “terrible and outrageous act” and said that he was “appalled at the incident”.

The Presidency of the European Union “strongly condemned the brutal terrorist attack in Kaluchak (Jammu and Kashmir), which resulted in the death of numerous innocent civilians” and expressed sympathy to the Government of India for its problems in controlling terrorism in Kashmir.

Similar condemnations were expressed by the leaders of Germany, Japan and Russia.

The Australian government while declaring Lashkar-e-Taiba a terrorist organisation based in Muridke near Lahore, Pakistan in 2003 attributed this massacre to it