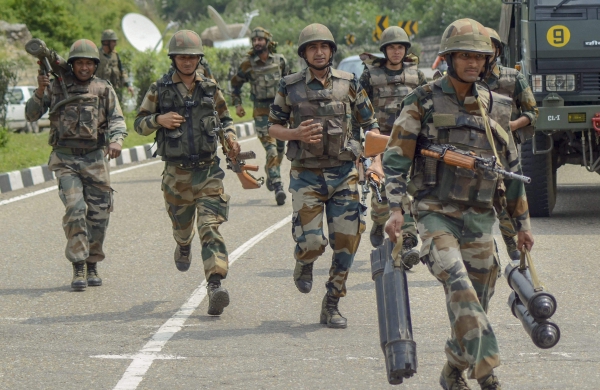 Two Pakistani terrorists were gunned down and one associate arrested in a joint operation launched by JKP, Army and CRPF at Poshana area in the mountainous district of Poonch district today. The slain terrorists have been identified as Sajid and Bilal. Two AK 47 Rifles, one UBGL, one Thuraya Satphone  were  recovered from their possession.

According to police sources, a joint patrol of the Police and Security forces launched searches at Poshana area in Poonch district after it received credible inputs about the infiltration of some terrorists in the area. While the searches in the area were going on, Police made efforts to persuade the hiding terrorists to surrender but they fired on the search party initiating a gunfight. In the ensuing encounter two terrorists were eliminated and one associate was  apprehended.

They were affiliated with proscribed terror outfit LeT. According to Director General of J&K Police  Dilbagh Singh said this is another attempt by Pakistan to send in Lashkar-e-Taiba and Jaish-e-Mohammad terrorists to Kashmir to disturb the ongoing democratic process of grass-root level elections adding the huge participation of the Jammu and Kashmir people in the ongoing elections has frustrated Pakistan.