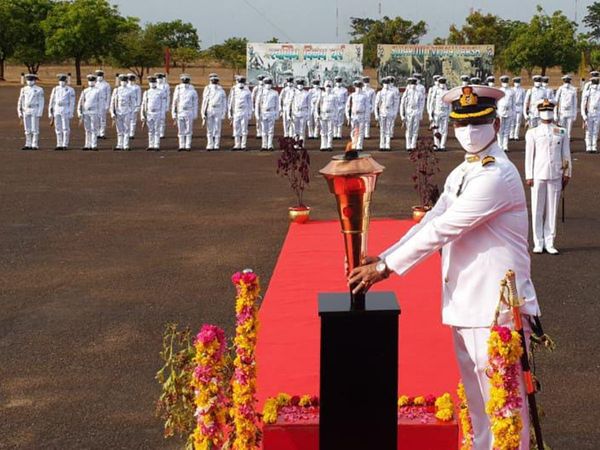 The Victory Flame, which symbolises India’s win over Pakistan in the 1971 war, was received at the Indian Naval Station (INS), Kattabomman near Tirunelveli on Sunday.

Golden jubilee celebrations were launched in December last year to mark the victory of Indian armed forces against Pakistan in the 1971 Indo-Pak War.

An official release said a wreath-laying ceremony was held and two minutes of silence was observed to remember and pay tributes to the veterans for their sacrifices during the battle.The Victory Flame was then taken to Kanyakumari where also the civil administration has planned to felicitate the veterans. Further, the flame is likely to be taken to the 1971 war heroes’ houses, of late sepoy Kasimani and late Naik Sangili Chelliah. The duo had made the supreme sacrifice during the 1971 war.

As per the details available, after INS Kattabomman, the Victory Flame was due to be received by the Coast Gaurd and later by INS Parundu.

It may be recalled that when the Golden Jubilee celebrations were launched in December last year, four Victory Flames were lit from the eternal flame of the National War Memorial. Each flame is being taken to the four cardinal directions through the cities and villages of 1971 war veterans and veernaris (war widows).