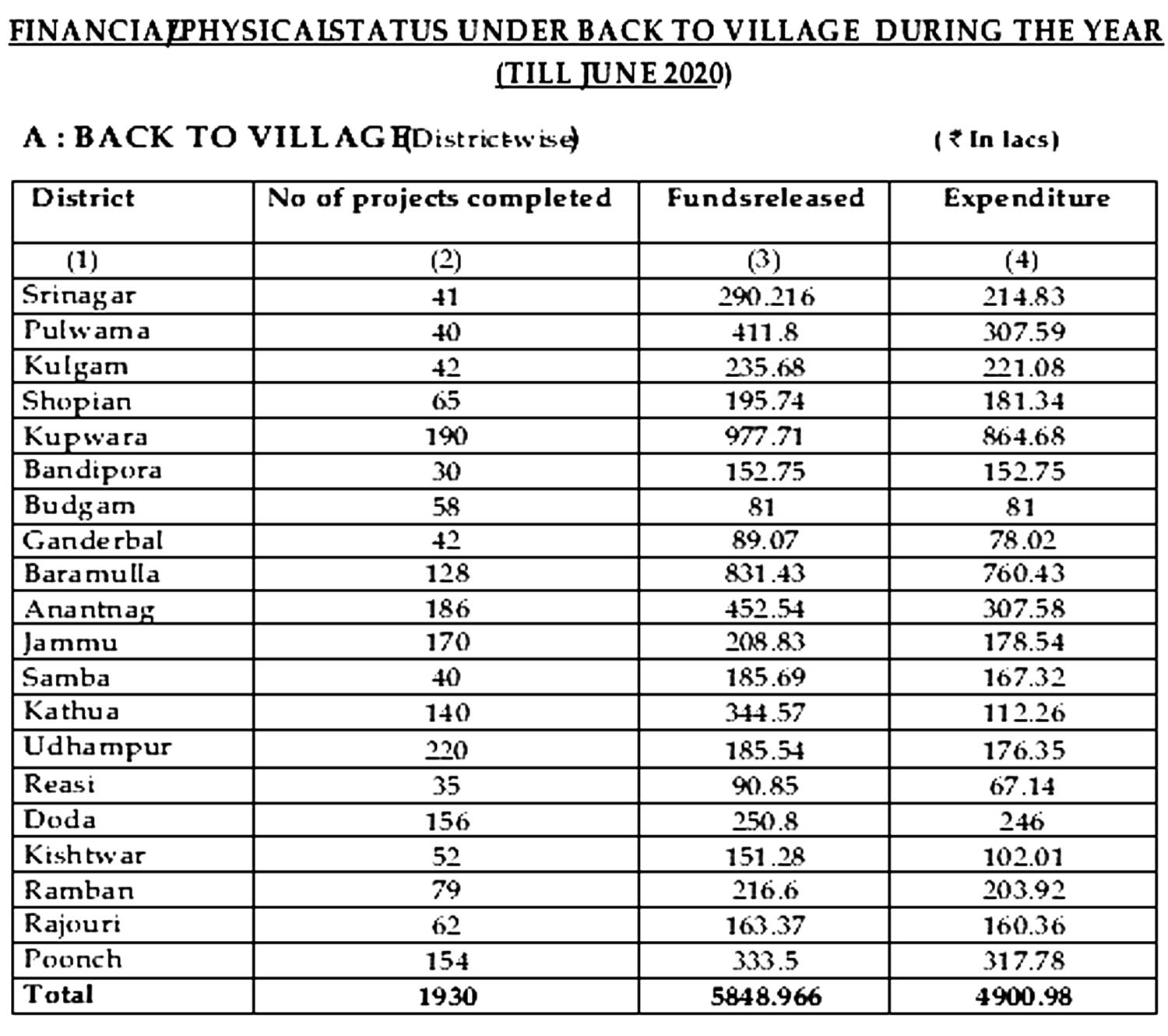 Jammu: The Back To Village (B2V) Programme, which has also found mention in the Independence Day speech of the Prime Minister Narendra Modi, has turned out to be a resounding success by giving major impetus to the development of the Union Territory of Jammu and Kashmir.
Under this unique initiative, more than 1900 projects of immense public importance have been completed till ending June this year and work is apace on over 2100 more projects, which will become reality within shortest possible time thereby meeting the long pending demands of the common masses.
As per the official statistics, the copy of which is available with EXCELSIOR, a total of 4189 officers covered 4621 Panchayats consisting of 5517 villages in two phases to reach out to people at the grass root levels. Moreover, a total of 26000 Panchayati Raj Representatives and 15,62,155 people participated in the two phases of B2V Programme.
A total of 4100 works were identified during the programme out of which 1930 works were completed by ending June 2020 at a cost of Rs 4900.98 lakh and the work on remaining projects is apace and will be completed shortly as sufficient funds have already been released by the Government to the concerned departments.
The data reveals that 34.35 kilometres of road length has been completed till June 2020 while as 33030 people have been benefitted under health sector by way of new and improved infrastructure. Similarly, 40,628 people have been benefitted under various water supply schemes through laying of pipe length of 263.53 kilometres and 2588 students have obtained benefits under education sector through additional class rooms and playfields etc.
Likewise, 11,875 students have obtained benefits under the youth services and sports sector by way of construction/improvement of 118 play fields and 4,27,326 people have been benefitted under power sector by way of providing poles, conductors and repairing transformers etc.
The data further reveals that against 213 demands of R&B Sector received by the Government during the B2V Programme, action has been initiated on 126 as on July 4, 2020. Similarly, against 86 demands pertaining to the School Education Department, 66 have been fulfilled while as 32 out of 80 demands pertaining to Health and Medical Education Department have been considered.
As far as Jal Shakti and Power Development Departments are considered, 40 out of 78 and 26 out of 58 demands have been considered while as in respect of Rural Development and Agriculture Production Departments, action on 21 out of 55 and 26 out of 52 demands has been initiated.
The demands of the people were relating to sanctioning of mini/micro power projects, establishment of grid stations, installation of solar lights, establishment of Degree College, veterinary centres, Fire and Emergency Stations, fruit mandies, solid waste management system, establishment of industrial estates, model villages and National Sports University, sports stadium and establishment of ITIs and Polytechnic Colleges.
As per the statistics, maximum 220 projects were completed in Udhampur district followed by Kupwara with 190 projects. Anantnag district is at the third spot with completion of 186 projects and Jammu at 4th place with completion of 170 projects.
It is pertinent to mention here that B2V Programme, which was launched in summer of 2019, was even mentioned by the Prime Minister earlier in the Mann-Ki-Baat as a festival of development, public participation and public awareness and now in his Independence Day speech.
Under this initiative, a total of 4189 officers covered 4621 Panchayats in two phases to reach out to people at the grass root levels. The objective was that the top levels of administration and people at grass root levels work in a spirit of togetherness and help in the empowerment of people.
About the road ahead, a spokesman of the Government said, “empowerment of the Panchayati Raj Institutions and Urban Local Bodies as the principal authority for planning, implementation and monitoring of the welfare schemes and development infrastructure in accordance with 73rd and 74th Constitutional Amendment Act is the priority”.
“The Government has made monitoring of projects through PULSE (Andriod Mobile App) and Geo Tagging, 100% physical verification and 3rd party monitoring mandatory”, he said, adding “focus will also be on completion of works initiated during the visit of Lieutenant Governor, Outreach Programme of Union Ministers and Chief Secretary during this year”.
It is worthwhile to mention here that Government of Union Territory of Jammu and Kashmir has also completed over 600 projects of immense public importance whose fate was hanging in balance during the period between five and 25 years by spending whopping amount of Rs 775 crore through Jammu and Kashmir Infrastructure Development Finance Corporation (JKIDFC).