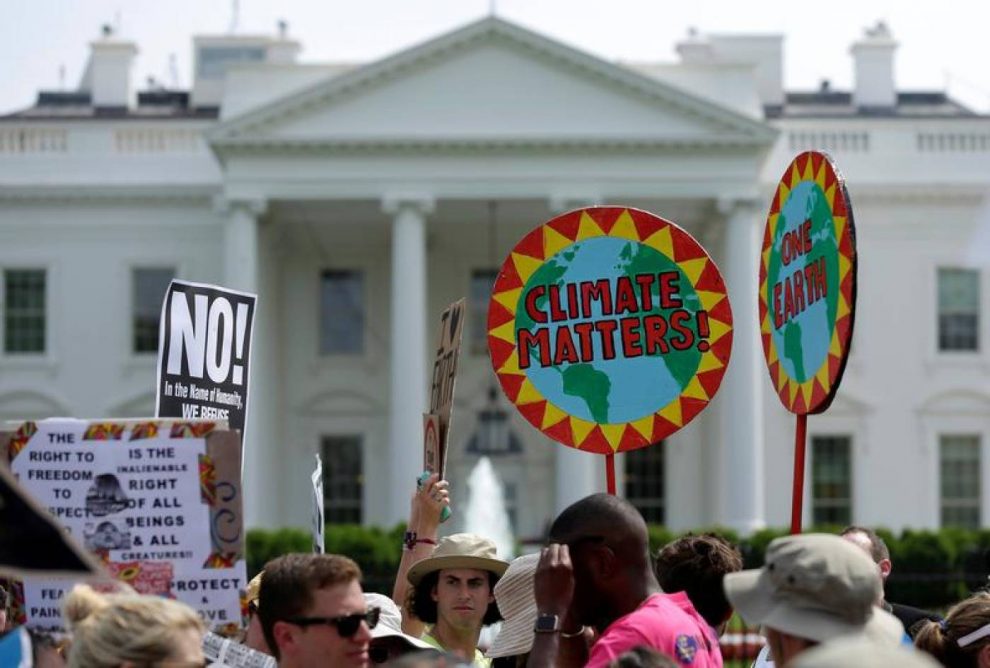 Joe Biden, who captured the U.S. presidency on Saturday, has promised one of his first acts will be to lead the United States back into the Paris Agreement on climate change, which it departed on Wednesday under incumbent President Donald Trump.

But the Democratic president-elect will then seek a fuller “180-degree turn” in U.S. climate policy, according to analysts.

Trump doubted climate science, supported fossil fuel use and had set no policy to tackle global warming, so U.S. states and cities, and some companies, took the lead on climate action.

Now the national government is expected to take a stronger role, although Biden’s success will depend in part on whether he has backing from the U.S. Senate.

Should Republicans keep control of the Senate, they would likely block large parts of his legislative agenda, including fighting climate change. That prospect could depend on the result of four undecided Senate races, including two in Georgia.

Under the Paris accord, countries are due before the end of this year to submit more ambitious versions of their original 2015 plans to cut planet-warming emissions and adapt to climate change to the United Nations.

Biden cannot meet that deadline, as he takes office only in January. The country formally exited the Paris deal on Nov. 4, a move Trump set in motion three years ago.

But Biden, who has said he will commit the country to reaching net-zero emissions by 2050, will quickly begin putting in place the elements of a new plan, said Andrew Light, a senior climate change official under former President Barack Obama.

That will likely include setting a target to cut U.S. emissions by 2030, aimed in part at showing other big emitters that the United States is serious about swift action.

“As he moves to try to re-engage, he needs to be able to say what the United States will do by 2030. China, Japan, South Korea, the European Union and other big emitters will all have that in hand,” said Light, now a public policy professor at George Mason University in Virginia.

With the coronavirus pandemic ongoing and the most recent U.S. stimulus package in September, Biden – and Congress – will be under pressure to push more money out of the door to keep the economy on a recovery path, Light said.

But under Biden, the next package is likely to be greener, focusing on measures to create clean-energy jobs or build climate-resilient infrastructure, from electric-vehicle charging stations to better public transport.

Light pointed to the economic stimulus package Obama passed soon after taking office in 2009 amid a global financial crisis.

With a focus on clean energy, the spending was the largest pot of federal climate cash “this country has ever put forward in one big package” – and Biden could do something similar.

Drawing on his campaign pledges, and in consultation with people working in key sectors, from energy to transportation to agriculture, Biden is expected to put together a set of proposed laws to embed his net-zero emissions pledge in law.

In doing so, he is likely to focus on how climate change interacts with other U.S. crises, said Nathan Hultman, an Obama-era official who helped develop the original U.S. Paris pact commitment.

Those range from the pandemic and its associated economic downturn to worries about inequality and racial justice – issues that “can in some ways be addressed simultaneously” through things like low-carbon job creation and cleaner air, he said.

Even as surging wildfires, hurricanes and other climate-linked disasters affect a broader range of Americans, support for U.S. action on climate risks still splits along party lines.

Economic realities, such as the plunging price of solar and wind power, and policies that ensure wide sharing of benefits from green policies could help shift that, he said.

But getting political buy-in and support across the whole country for a rapid transition will be a challenge, he said.

The answer is likely to come from states and cities that are showing change is both possible and beneficial.

Oil giant and Republican stronghold Texas, for instance, has quietly become “a stand-out for wind energy… they just don’t talk a lot about it as climate policy”, Hultman said.

Such changes already mean energy is no longer the biggest emitter of climate-heating emissions in the United States, with transport now in first place, he said.

Biden has promised an early summit with leaders of other big-emitting nations, to push for more ambitious emissions cuts – “basically a 180-degree turn”, said Brendan Guy, manager of international policy for the Natural Resources Defense Council.

“He’s been very clear the next priority after re-joining the Paris Agreement … is to really rally the world to ramp up their climate targets,” Guy said.

That effort is likely to include a push to reduce shipping and aviation emissions – not covered by the Paris Agreement – as well as to scale down powerful emissions from refrigerants, and make reporting of cuts more transparent, said Hultman.

While tensions with China remain high, the United States might also pursue bilateral clean investment deals with big-emitting countries such as India or Indonesia, Light said.

And with the European Union discussing imposing carbon border taxes on imports from countries that do not take strong climate action, Biden may consider doing the same – or putting in place a carbon price, Guy said.

Biden has also promised to meet U.S. commitments under the Paris Agreement to raise a share of the $100 billion a year in climate finance rich nations pledged to help poorer countries grow cleanly and adapt to climate change.

Obama had promised $3 billion to the Green Climate Fund, but only $1 billion was delivered before Trump suspended payments.

To shift the United States onto an equitable clean energy path swiftly enough, Biden will need to incorporate climate considerations into all government decisions, the experts said.

That could mean creating a National Climate Council – similar to the National Security Council – to ensure “climate is always right next to the Oval Office”, Light said.

National-level climate policy also has to support “all these other levels of government we’ve seen so energized over the last few years” in the absence of top leadership, Hultman said.

Ethiopian girls trapped in sex trade as COVID-19 deepens desperation
Why so much hate for Kashmir Police?
Comment