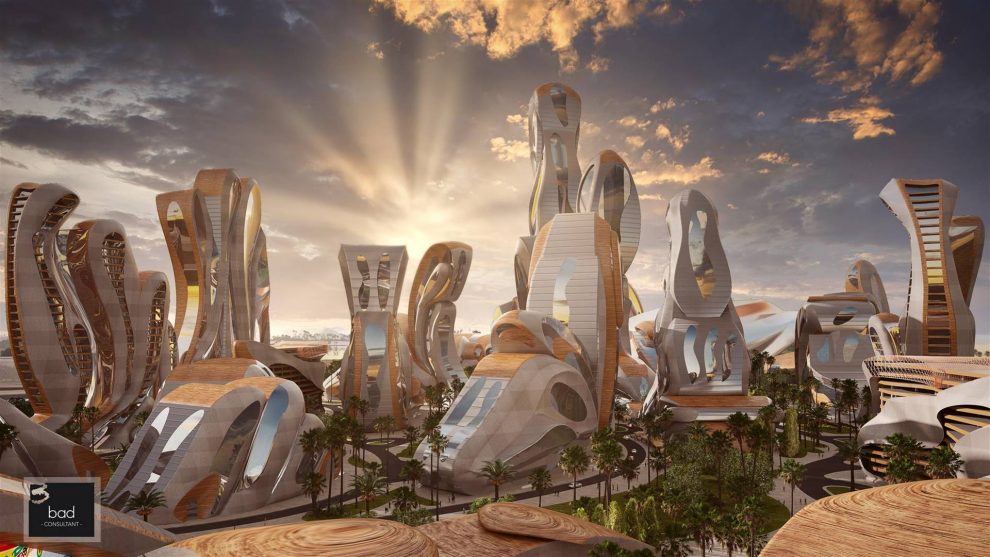 DAKAR: Herds of cows meander across the one-lane highway that leads down Senegal’s coast to Mbodiene, a farming village surrounded by scrubland where singer Akon plans to build a futuristic city.

The designs, which show shiny, pinkish buildings that bend and curve like waves, would look at home in any sci-fi movie.

In the master plan, architect Hussein Bakri has carved out space for a parking lot – for flying cars.

Akon, the Senegalese-American singer of 2006 hit “Smack That”, has said the city will attract tourists and create thousands of jobs. U.S.-based firm KE International said it plans to start construction on the $6 billion project next year.

But in Senegal, a West African country where villagers drive horse carts on unpaved roads, the proposal has met with suspicion and bemusement.

Questions about land rights, financing and feasibility remain unanswered, and locals are wondering whether the promised benefits will ever come.

“Akon came to meet us. He said he’ll do this. It could be real or not real – but I think it’s real,” said Magueye Ndao, mayor of Ngueniene, the municipality containing Mbodiene and other villages where Akon City will be built.

The list of promises is long, said Ndao and other local leaders. Chief among them is a training centre and jobs for youth, as well as improved schools and health services and extension of the water, sanitation and electricity networks.

“We welcome this project with open arms and pray that everything Akon told us will be realised,” said Ndao. If history is any guide, they will most likely be let down, said Xavier Ricou, an architect and former director at APIX, Senegal’s agency for promoting investment and major projects.

“During the 15 years or so that I worked at APIX, I saw proposals from people who wanted to make cities all over,” said Ricou, revealing how millions of dollars were spent on advanced plans for cities that were then never built.

They were mostly abandoned, he said, due to inadequate funding, a change of government or some other, unknown reason.

As for Akon City: “I think nothing will happen.”

Akon, whose full name is Aliaune Damala Badara Akon Thiam, spent part of his childhood in Senegal before moving to the United States. His first big philanthropic initiative was Akon Lighting Africa, a solar power project launched in 2014.

The 47-year-old is also behind Akoin, a crypto-currency that he says will power Akon City.

In November, work began on a youth centre in Mbodiene – not as part of Akon City, but one that locals said Akon is behind.

At the project site, a single stone sits on a pedestal in an empty field, untouched since Akon and the tourism minister held a stone-laying ceremony to kick off the project in August.

Of the $6-billion-dollar budget, $4 billion has been secured from investors, including Kenyan businessman Julius Mwale, said Paul Martin, director of the project at KE International, an engineering and infrastructure consulting firm.

Martin said he could not provide more details or name other investors due to confidentiality.

Reached by email, Mwale’s office declined to answer questions for this story.

Akon’s team did not respond to multiple interview requests.

Akon City was designed “for the people”, said Dubai-based architect Bakri, who began visiting Senegal several years ago and said he was inspired by what he saw.

“We tried to give the people the feeling of Africa,” said Bakri, who is Lebanese. A promotional video shows buildings that are loosely shaped like trees, gazelles and butterflies.

With two resorts, four or five hotels, a hospital and a tech park, Akon City will be a destination for both locals and the global elite, said Bakri. Akon has also said that he hopes it will be a “home back home” for African Americans.

Residents of nearby villages are excited, if concerned.

“The studies that were done were not in collaboration with the commune of Ngueniene,” said Pape Massamba Thiaw, a municipal councillor and president of the youth commission for Ngueniene.

He is worried about the disconnect between Western and Senegalese culture, the impact on the environment, and the possibility that smaller hotels nearby will fold, he said.

He also wants to make sure that young Senegalese get to work in offices, not just doing construction or collecting trash.

“I don’t want us to be just day labourers. We have to be among the managers,” he said.

Martin said KE International will ensure contractors allocate 90% of jobs to locals and will build colleges to train locals in new skills.

Although Martin said environmental and social impact studies had been done, Thiaw said that no study had engaged the community or been shared with local leaders.

The head of the Senegalese Coastal and Tourist Zones Development and Promotion Company (SAPCO), the state agency leading the project, said studies were still underway.

“Since the project is not 100% led by the commune of Ngueniene, there are bound to be fears and worries about it,” Thiaw told the Thomson Reuters Foundation.

“Up until now there have been no problems. The problems will arise the moment his promises are not kept.”

The land earmarked for Akon City, an expanse between the highway and the ocean, can no longer be farmed as it is heavy with clay and saltwater, said Mayor Ndao.

In 2009 it was ceded to the state, for future tourism development by SAPCO. But many of the villagers who were owed compensation were never paid, said government sources.

According to documents seen by the Thomson Reuters Foundation, the government declared in 2014 that 1.8 billion CFA Francs ($3.35 million) was owed to 385 people for a total of 504 hectares in Mbodiene and 110 hectares in nearby Pointe Sarene.

A local government employee, not authorised to speak on the topic, said a little less than half the money has been paid.

“We have paid one part around Pointe Sarene. We have tried to prioritise so that the Mbodiene villagers are paid,” said Aliou Sow, Director-General of SAPCO, adding that the payments are “in the process of regularisation”.

The first phase of Akon City will be built on 55 hectares, said Bakri, but the long-term plan is to use all 504 hectares in Mbodiene. So far a deal with SAPCO has only been finalised for the 55 hectares, he said.

KE International, whose website says the city will be located on 2,000 acres (800 hectares), declined to comment on the question of compensation to former landowners.

Concerned about the project, the Senegalese chapter of Transparency International wrote to the tourism minister in September requesting clarity on the shareholding arrangement, the property rights, the impact studies and more.

In a written response shared by the civil society group, minister Alioune Sarr did not provide details but said the project “will obey Senegal’s laws and regulations”.

As for whether the plans are realistic, architect Bakri said he designs in anticipation of new technology and inventions that he believes will land in 25 years – including flying cars.

“If that was happening in Dubai you would say, okay well that’s a new phase of architecture,” he said.

“Why not in Africa?”