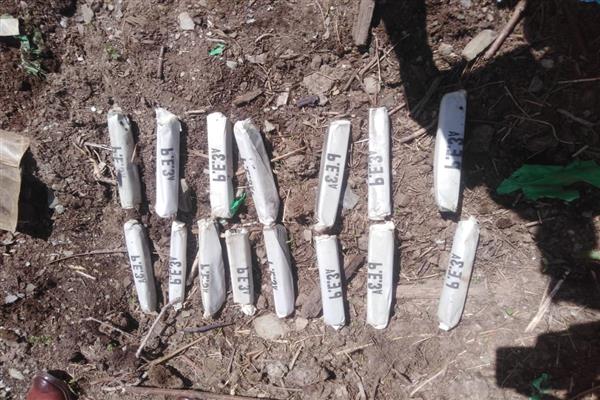 28 weapons, over 60 kgs of narcotics recovered in last two in this area: Def Spokesman

SRINAGAR, MAY 23: Security Forces Sunday claimed to have recovered an explosive material in Karnah area of Tanghdar in north Kashmir’s Kupwara district.

In a statement  defence spokesman in Srinagar Lieutenant Colonel Emron Musavi said that based on a specific Jammu & Kashmir Police intelligence, a joint operation was launched by police and Army in Karnah, Tangdhar, Kupwara on May 22 morning.

“The joint operation led to recovery of 15 sticks of Plastic Explosives, near Nichli Jabri village of Tangdhar. These explosives were hidden in a Dhok for further transshipment to the hinterland,” the statement said.

The defence spokesman said such intelligence based swift operations are being conducted by the security agencies in the heart of Tangdhar bowl with zero inconvenience to locals”.

“Security agencies and Civil Administration in Karnah Tehsil continue to work hand in hand to negate the security threat of smuggling of narcotics, weapons and stores for terror organisations in J&K, through Tangdhar bowl. In the last two years, a total of 28 weapons & over 60 kgs of narcotics has been recovered from Karnah, apart from a host of explosives including ammunition & grenades,” the defence spokesman said—(KNO)