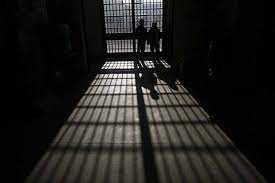 SRINAGAR: As many 1442 persons are in jails of Jammu & Kashmir for their involvement in drug-related crimes, official data shows.

According to the data, 1229 undertrials are lodged in prisons for their involvement in murders. Of them, 1129 are males and 100 are females.

According to the figures, 304 persons are lodged in jails of J&K under cases registered against them under the Arms Act.

The data also shows that 43 persons were in jails for dowry-related deaths and 39 for crimes against women. As per figures, 18 undertrials are in jail under the Protection of Children from Sexual Offences Act- a law enacted by the Parliament to protect children from offences of sexual harassment—(KNO)