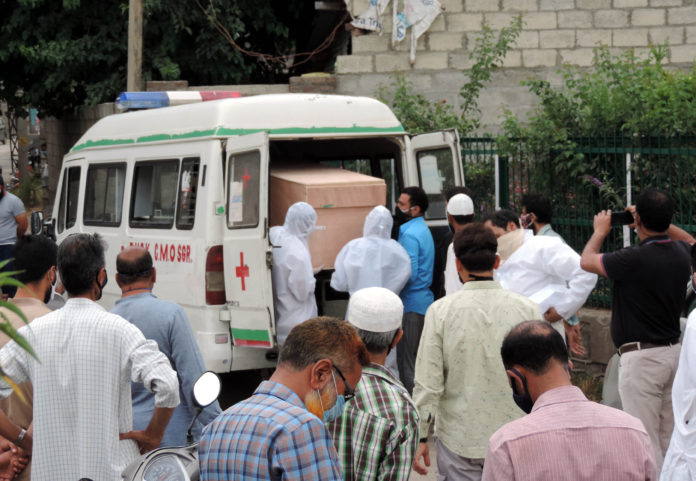 Srinagar, Jul 23: As many as 12 people — including seven from Srinagar, two from Baramulla, one each from Pulwama, Kupwara and a non-local — died due to COVID-19 since Wednesday night, taking the death toll due to the virus in the Union Territory of J&K to 285.

As many as 29 people, including 28 from Kashmir and one from Jammu, lost their lives due to COVID-19 during the first three days of this week.

Official sources said three patients from Srinagar, including 86-year-old man from Batamaloo, a 52-year-old man from Zoonimar and 40-year-old from Habba Kadal, died at S K Institute of Medical Sciences on Thursday. “Trio had tested positive for COVID-19 and were suffering from respiratory problems,” they said.

They said two more COVID-19 patients, including a 46-year-old man, a resident of village Gazriyal in Kupwara and 70-year-old woman, a resident of Uri in Baramulla, died at the hospital on Thursday. “A 60-year-old non-local from Kerala, who was admitted to SKIMS for respiratory problem, died on Thursday,” they said, adding he had tested positive for COVID-19.

Earlier in the day, a 53-year-old man, a resident of Nawakadal in Srinagar, died at SKIMS on Thursday. “The patient, who was admitted to S K Institute of Medical Sciences (SKIMS) for respiratory problem, had tested positive for COVID-19,” they said.

They said a BSF jawan, who was posted in Baramulla, was admitted to SHMS hospital on Monday for respiratory distress and pneumonia. “The patient, who tested positive for COVID-19, died at the hospital late on Wednesday evening,” they said.

Another patient, a 56-year-old woman from Pulwama, was admitted to SHMS hospital on Tuesday for respiratory problem. “The woman, who tested positive for COVID-19, died at the hospital late last night,” they said, adding the patient was suffering from a cancer patient.

With this fatality, the death toll due to COVID-19 has risen to 59 in Baramulla. Srinagar is the worst affected district in J&K in terms of causalities with 78 deaths due to COVID-19.

The number of deaths stands at 26 in Kulgam while 19 people each have lost their lives to the disease in Shopian, Budgan and Anantnag. Sixteen people have lost their lives in Kupwara and 15 in Pulwama while seven deaths occurred in Bandipora. Ganderbal district recorded fifth death due to COVID-19 on Wednesday.

As many as 48 patients — including 10 persons from Baramulla, 12 from Srinagar, six from Kulgam, three from Anantnag, Kupwara and Budgam, Jammu region, two each from Shopian and Ganderbal, one patient each from Pulwama, Bandipora and a BSF jawan — died due to COVID-19 between July 6 and July 12.