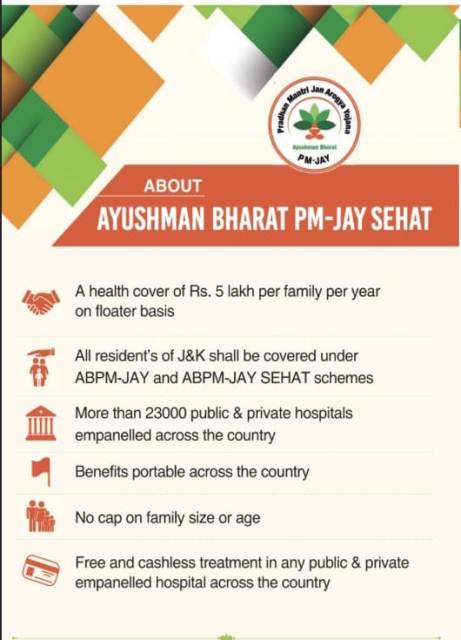 The Scheme was e-launched by Prime Minister, Narendra Modi on 26th December 2020.

Since the launch of scheme, in first forty days, ten thousand free and cashless treatments worth Rs. 7.21 Crore have been provided to eligible beneficiaries under the scheme. Besides 10.77 Lakh Golden cards have been issued in addition to 12.90 Lakh Golden Cards issued under AB PM-JAY.

Financial Commissioner, Health & Medical Education, Atal Dulloo said, “AB PM-JAY SEHAT Scheme is a historical step in the direction towards Universal Health Insurance. We have made a humble beginning but there is a long way to go. It is heartening to see residents availing free and cashless benefits from reputed empanelled hospitals of Jammu & Kashmir.”

He further said, “Residents of Jammu and Kashmir have already started availing benefits under the scheme from reputed hospitals outside the Union Territory of Jammu & Kashmir. He added that since the launch of scheme, 155 patients have already availed benefits in empanelled hospitals from outside J&K Using portability feature of AB PM-JAY scheme.”

ABPMJAY SEHAT scheme launched by the government covers all residents of Jammu and Kashmir including employees and pensioners as well as their families.

ABPM-JAY SEHAT scheme in convergence with PM-JAY aims to provide Universal Health Insurance Coverage of Rs. 5.00 lakh per family on a floater basis. AB PM-JAY SEHAT has the same benefits as available under AB-PMJAY.

ABPM-JAY SEHAT scheme provides cashless access to empanelled health care services for the beneficiaries. More than 24000 empanelled public and private hospitals (including 229 hospitals empanelled within Union Territory of Jammu & Kashmir) under AB PM-JAY are providing benefits under this scheme.

The scheme envisions to help mitigate expenditure on medical treatment to all the residents of Jammu & Kashmir. It covers up to 3 days of pre-hospitalization and 15 days post-hospitalization expenses such as diagnostics and medicines. There is no restriction on the family size, age or gender.The benefits provided under the scheme are portable across the country.

The registrations under the scheme can be done at any Common Service Centers (CSCs) or Empanelled Hospitals. A network of more than five thousand CSCs are up and working. About 24 Lakh residents of UT of J&K have already registered under the scheme making 48%the families eligible for benefits under the scheme.