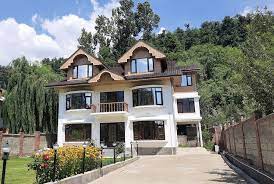 Srinagar: Pahalgam has become the first destination in Jammu and Kashmir for the launch of 10 homestays under the Crown of Incredible India’ project, an official spokesman said here on Friday.

He said the project is an initiative of the Jammu and Kashmir administration for rural homestays at tourist destinations across the union territory in collaboration with OYO Rooms.

Deputy Commissioner, Anantnag, Piyush Singla said the experiment started in the district a few months ago and the overwhelming response has resulted in the project being upscaled at the UT level.

He said all stakeholders have been taken onboard during the discussion to ensure that the initiative fills the void in supply as well as is a meaningful employment opportunity for the youth.

Singla said the initiative will be instrumental in boosting both domestic and international tourist footfall.

Talking about the groundwork behind the initiative, he said concerted efforts were made by the district administration over the past few months and detailed planning went into making it a success.

The substantial impact that this project will have on the rural economy will be unprecedented and the youth should come forward and exploit this opportunity. This project will be a game-changer in the field of rural tourism, he added.

In Pahalgam, while 10 homestays have already been registered and are live on an online portal, another 10 to 20 homestays are being made operational, the spokesman said.

Several youths of Daksum, Verinag, Kokernag have also expressed their interest in setting up similar homestays and efforts are underway to make this a reality soon, he said.

Under the initiative, any resident can collaborate and provide residential accommodation to tourists, he added.

The idea has been gaining prominence globally and is operational in various parts of the country. Homestays provide an alternate sustainable source of income for the owners of such facilities, the spokesman said.

In collaboration with the Mission Youth’, the Anantnag district administration is currently exploring the possibilities of setting up homestays in other prominent tourist destinations, with a focus on those destinations that are yet to be explored due to infrastructural deficiencies, he said.

The youths are being encouraged to become partnering entrepreneurs who will in turn fulfill three important goals — generate employment, boost tourist footfall and aid infrastructural capacity building for tourism with a modest investment in hitherto unexplored destinations, the spokesman said.