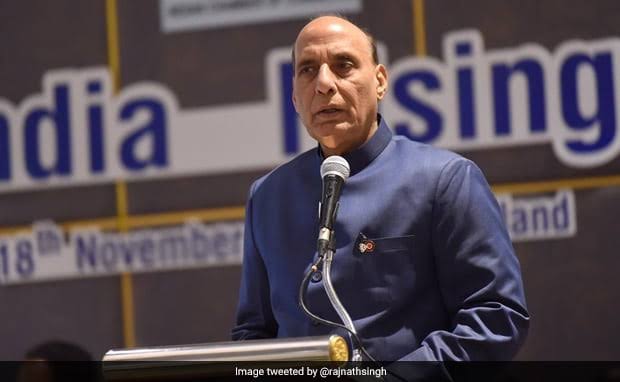 Defence Minister Rajnath Singh on Friday said his ministry has set a target of $26 billion for aerospace, defence services and goods by 2025 under the Defence Production Policy and in that, approximately $10 billion is targeted for creating job opportunities for 20-30 lakh people.
“Under the Defence Production Policy, the Ministry of Defence (MoD) has set the target of $26 billion for aerospace, defence services and goods by 2025. In this, approximately $10 billion is targeted for creating job opportunities for 20-30 lakh people,” a defence ministry release quoted Singh as saying in a video message during the DRDO Industry Synergy summit 2019 in Hyderabad. Minister welcomed synergy being created for boosting indigenous development of defence systems.
He said that DRDO is taking crucial steps for attaining self-sufficiency in the area of defence systems development.
Highlighting the Indian Government’s various initiatives to encourage the innovation and development within the country, he stressed that excellence is to be brought in the field of defence innovation and their adoption to the defence systems.
“DPSUs, Industry, research institutes and services need to work hand in hand. In this connection he also mentioned the target set by the government to incorporate at least 25 AI based products into defence in near future,” he said.
Singh appreciated that DRDO has nurtured more than 1,800 industries which are actively working together to produce defence systems. He asked the DRDO and industry to explore new ways for enhancing synergy to achieve the goal of self-sufficiency.
Chairman DRDO and Secretary DDR&D, Dr G Satheesh Reddy, in his address mentioned about the latest policies of DRDO like like Zero Transfer of Technology (ToT) and Zero Royalty for Development-cum-Production Partners (DcPP) and free usage of DRDO patents by domestic Industry. Expressing confidence in defence industry, he said, healthy scenario is to be fostered for closer interactions between Industry and DRDO to overcome the gaps.
The DRDO Chairman highlighted that of late industry base has greatly widened from mere manufacturing to development and designing of components and sub-systems.
He said that the Indian Industry has matured from ‘Build from Print’ to ‘Build from Specifications’.
A panel discussion chaired by Chairman DRDO was also held. Many concerns were raised and suggestions were given by the industry participants. It was communicated that constructive suggestions will be duly taken into account in the upcoming policies for the improvement of the functioning of the system.
“Some industry representatives shared their experiences of working in the defence sector and spoke about the challenges faced by startups and MSMEs in manufacturing and exports. Senior officials of DRDO and around 300 Industry representatives were also present on the occasion,” the release said.